How One Board Sustained a Mission and Created a Legacy: The Story of Hospice of Central Florida 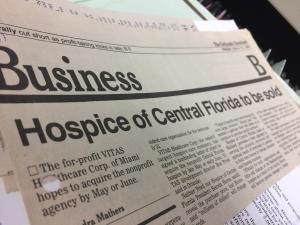 In 1996, Hospice of Central Florida (HCF), a nonprofit hospice care provider, sold its assets and business to VITAS Healthcare Corporation, which was headquartered in Miami. At the time VITAS was the largest provider of hospice services in the United States and was focused on expanding into Central Florida.

Hospice of Central Florida was a much smaller organization with 217 employees who provided nursing, counseling, home health-aid, bereavement services, chaplain support and social work. It had served more than 13,000 patients and families since 1976.

After VITAS approached HCF about VITAS’ desire to acquire HCF’s operations, the staff at HCF did the due diligence to see if this would be the best decision for its clients. After two years of careful research and investigation, the HCF staff concluded that VITAS could provide, more advanced hospice care and better pain management services, so the HCF staff advised its board of directors that HCF staff supported the sale. The HCF board of directors also agreed to the sale because it agreed with staff’s recommendations and the board knew that the federal reimbursement formula was changing. Everyone agreed that the public support that HCF received from the community should be directed to other important grief and loss programs in the Central Florida community.

Gordon Arkin and Andy McEachron were chairs of the HCF board at the time of the sale and were instrumental in negotiating the transaction. Arkin was a partner at Foley and Lardner LLP and McEachron was president and CEO of Tartan Development. The process of the negotiations and the sale assured the continued provision of quality hospice care in Central Florida and that proceeds from the acquisition would establish the HCF Foundation.

When the process was completed, $8 million in proceeds from the sale established the HCF Foundation. As part of its mission, HCF Foundation supported programs that were outside the core services of hospice care and designed to meet grief and loss needs in the community. The programs were centralized in a renamed organization, now known as New Hope for Kids of Maitland, Florida.

In the beginning years of the HCF Foundation it became clear to Gordon and the other board members that the costs were high to manage the foundation and they needed a more efficient way to manage its operations.

HCF Foundation converted from a private foundation to an endowed advised fund at the Central Florida Foundation and Gordon couldn’t believe how easy it was. The transition to CFF streamlined the operations of the HCF Foundation to allow for more focus and assets to go towards the mission of meeting grief and loss needs in the community. It solved a lot of challenges that they had been facing when the professional staff at CFF began taking care of the administrative details.

“You can accomplish so much more by working with the Central Florida Foundation,” said Arkin. “You have access to resources like Nonprofit Search, there is professional investment oversight and it’s certainly something that should be given careful consideration because it’s very financially efficient to do.”

“I really believe that you need to set things up for the future,” said McEachron. “It’s smart giving.”

In the case of HCF Foundation, the board became an advisory committee that meets annually to continue to advise on the fund and invest in local initiatives that provide grief and loss support to children and families. The fund has heavily supported the grief and loss services that New Hope for Kids provides to
families and children.

“I am proud that we have helped support a viable nonprofit with a very active board to provide a really important service to the community,” said Arkin.

Mark Brewer, president and CEO of the Central Florida Foundation points out that private foundations and trusts can fulfill distribution requirements by contributing to an advised fund at the Foundation.

“This allows investors to take the time needed when deciding how the funds should be distributed to local nonprofits,” said Brewer.

CFF is here for people who want to invest in their community. It empowers people to make informed decisions and support local initiatives make a difference now and in the future.

“Working with Central Florida Foundation is a way of taking care of your community and using information you can get through CFF to invest that money wisely,” said Gordon Arkin.