Endowment at Work for the Arts Community 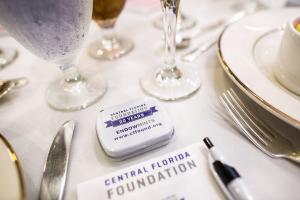 This is the third in a trilogy of articles on the impact of endowment on the arts community in Central Florida that was published in the November/December Orlando Arts Magazine. The first provided a primer on endowments, while the second made the case for endowments to provide stability and sustainability to arts organizations.

I heard from many people who wanted to see examples of how endowment is created and used by arts organization. So, in this final article, we’ll look at a few endowments held at the Central Florida Foundation that are designed to fuel sustainability for arts organizations and their missions, while providing the community with a legacy for the donors who establish them or a living memorial for important leaders.

Winter Park attorney Kenneth Murrah* and his wife Ann Hicks Murrah are passionate donors to many causes. Focusing on their leadership in organizations they love, the Murrahs created a plan—beyond what they give today—to build three endowments. This deferred gift strategy is representative of how many donors and philanthropists create planned gifts that endow organizations in perpetuity. The Kenneth and Ann Hicks Murrah Endowment I is for the Orlando Philharmonic Orchestra and will support the named Principal Timpani Chair. Endowment II is for the Bach Festival Society of Winter Park. Endowment III is for the Dr. Phillips Center for the Performing Arts to support the not-yet-constructed acoustic symphony hall. Establishing endowments is one way charitable investors create accountability for plans in progress and provide incentive for completion.

Scholarship endowments are a popular way to impact both arts and education. Many donors establish endowment to celebrate their commitment to an award in perpetuity without saddling the organization with the endless work of fundraising. The Florida Symphony Youth Orchestra is the beneficiary to six endowments at the Central Florida Foundation, the first established just a decade ago to provide scholarships for the Germaine Haserot Award. The Haserot Award remembers an important artist who lived and died in Winter Park, and is presented each year to two graduating seniors—one string player and one wind player. Based on that success, donors stepped up to create five named scholarship funds, all benefiting students annually.

The Holocaust Memorial Resource & Education Center of Florida has an endowment at the Central Florida Foundation established by a past board to recognize legacy in the mission. Jim Shapiro made the endowment gift in 2012. It wasn’t named for him, but for Helen Greenspun, a Holocaust survivor and emeritus board member. She has dedicated her life to teaching future generations about the horrors of those years and this endowment provides ongoing support for Holocaust education.

Whatever your passion, endowing an arts organization provides the financial sustainability for it to thrive, without the anchor of having to raise new dollars every year forever.

*Mr. Kenneth Murrah passed away on December 5, 2014 in Winter Park, Florida. We are honored to have worked with him over the last 20 years in different capacities and to have helped him create his legacy.